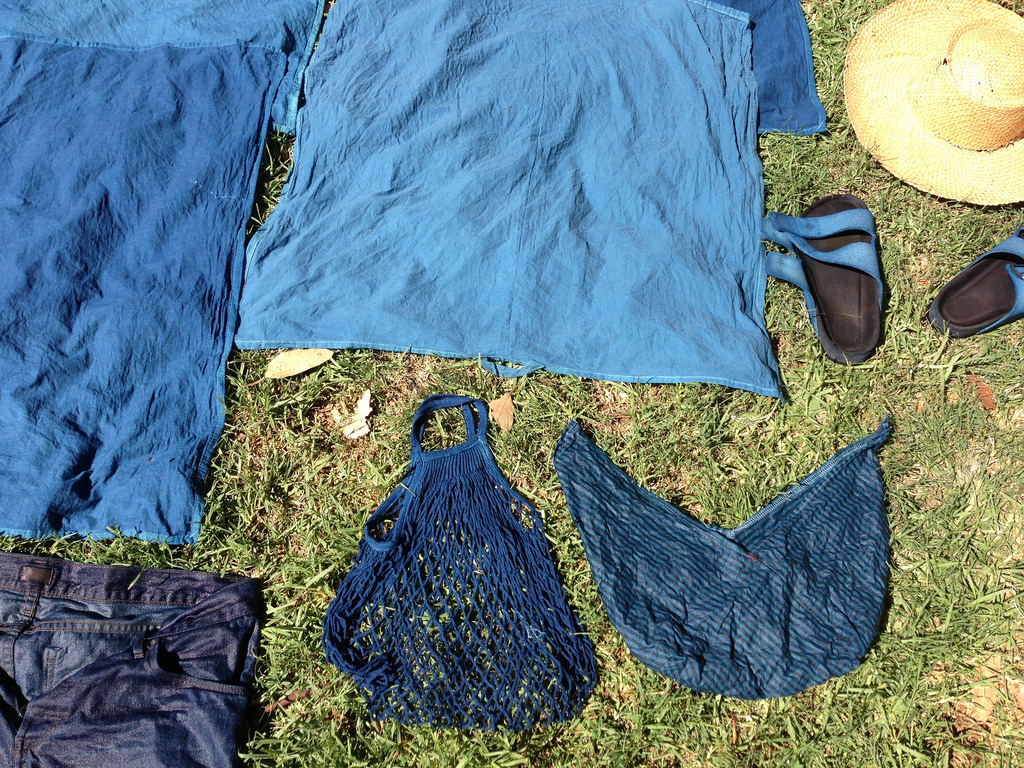 Last week, I got quite the call from Molly (the owner and founder of Ambatalia.) Screaming with excitement, Molly explained to me that she and her daughter Camille were going to make a spontaneous trip to Los Angeles to attend the Woad Workshop with Denise Lambert. 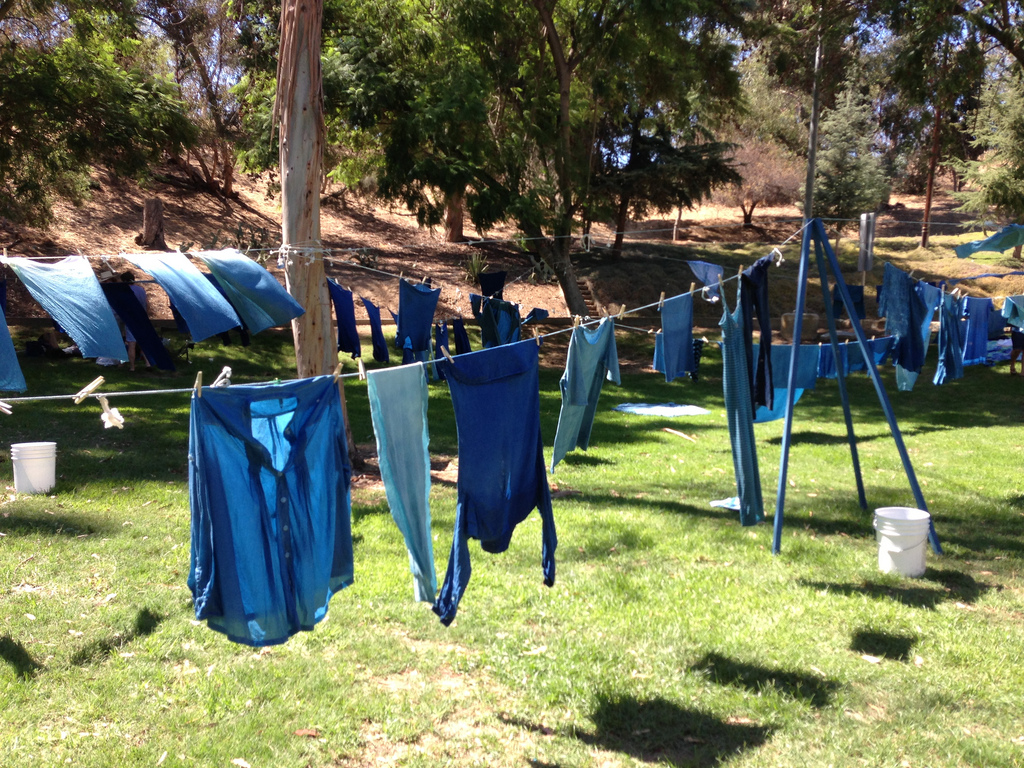 "Woad? What's woad?" I asked. With no prior knowledge of the subject, I decided to dedicate this weeks post to learn about woad and also share some of the beautiful photos Molly took while at the workshop.

So, this past Saturday, Molly and her daughter got to spend the whole day in Elysian Park learning how to dye with woad-the dye behind the iconic French Blue. The workshop was hosted by the French General, a beautiful store in Los Angeles that specializes in French fabrics and papers. And I decided to spend the past week researching what woad was and the interesting history behind it.

I intended on doing an article purely discussing woad and its history, but quickly realized that it is almost impossible to talk about woad without talking about indigo as well. Their histories are so intertwined that it took quite some investigation to try and understand how one distinguishes itself from the other.

Before the introduction of indigo to Europe, Europeans used the native woad plant, Isatis tinctoira, as a blue dye. Evidence shows that woad was used as early as prehistoric times, throughout the Bronze Age, and even by the Vikings. Looking a lot like spinach, it is a blue-green color and has small yellow flowers. It can be found growing everywhere from Central Europe and the Mediterranean countries, across Russia, Western and Central Asia to China and Japan.


In its chemical composition and methods of use and color, it is essentially the same as indigo. The difference between woad and Asiatic indigo is that the dye-element in the woad is significantly less concentrated then the indigo. This means that you need a lot more woad dye to produce the same color that a smaller amount of indigo dye will give you.

Asiatic civilizations were using indigo for thousands of years before it was ever introduced to Europe. The import of indigo to Europe picked up with the discovery of the Sea Road to India round the Cape of Good Hope in 1498. Although indigo really was a superior and more concentrated dye, many Europeans were extremely resistant to the import of indigo for a variety of reasons. In Europe at the time, woad was a significant industry-especially in Central Europe. Because of this, European dyers did not want their customers to start buying imported indigo instead of their native woad. This was not only a concern of the European dyers, but the European governments, who sought to protect their own economic structure.

France and Germany in particular had thriving woad industries. For these reasons, in 1598 France forbid the use of indigo by instigating a number of drastic laws. Nicknamed the “Devil’s Dye,” dyers were forced by the government to swear an oath that they would not use indigo, but instead continue using the native woad. In Germany and France, dyers were threatened death if these laws were not obeyed.

Unlike Germany and France, England had never had any significant production of woad. In the 17th century, the British marketed Indian indigo as its interests became more and more concentrated on the products of the countries of its Empire. But it wasn’t until the end of the 17th century, when the Dutch started a well-organized trade in tropical products, that indigo made its final breakthrough. The ban on indigo was lifted and for the next couple of centuries it was the best of all dyes in Europe, and woad became less and less frequently used.

It was interesting because I did the bulk of my research in the library at my school and there was not one book on woad, but there were a lot of books on indigo. In all of these books on indigo there was a paragraph or a page or so dedicated to woad. It was incredible to me just how little information I could find on the subject.

The resources (all books) I used are listed below:


Indigo: Egyptian mummies to blue jeans by Jenny Balfour-Paul
Indigo Textiles: technique and history by Gosta Sandberg
Indigo: in search of the color that seduced the world by Catherine McKinley
Indigo, madder & marigold: a portfolio of colors from natural dyes by Trudy Van Stralen
Harvesting color: how to find plants and make natural dyes by Rebecca Burgess

And a great online article about woad can be found here from Hand Eye Magazine.

All this talk about woad has me wanting to try some dyeing myself! Hope it inspired you too. 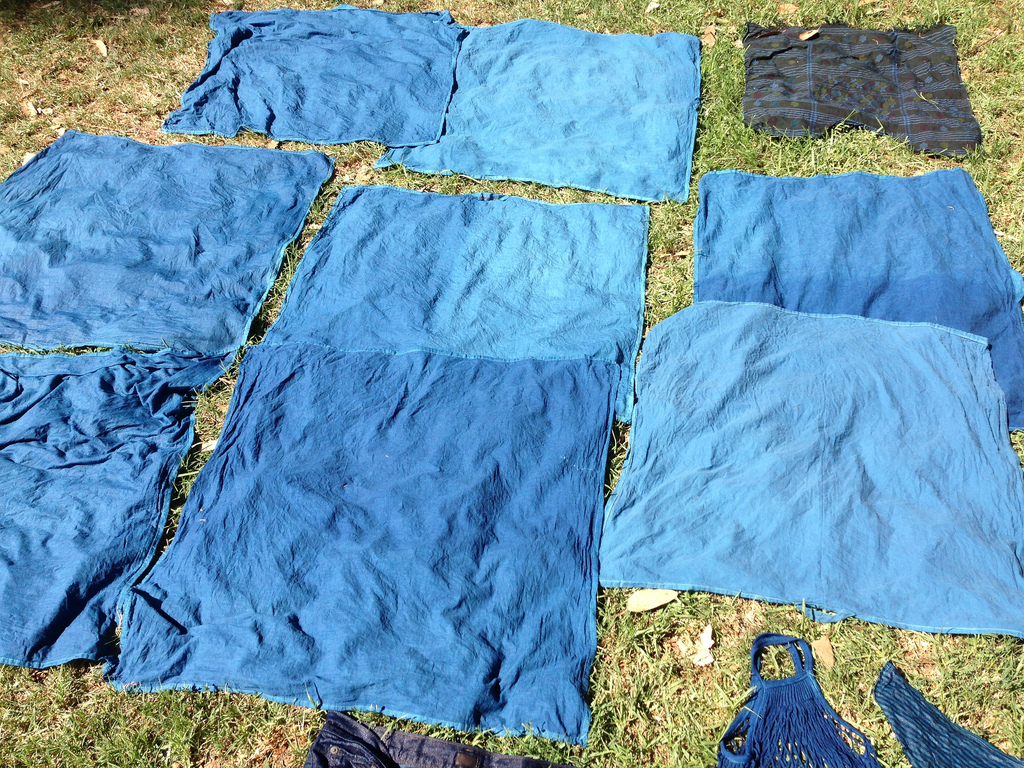 I am curious to know what color the Birkenstocks were before they were dyed and how they were dipped. Thanks! Beautiful photos and now I am interested in learning more and maybe signing up for the next class!

Yes we are definitely dreaming of some woad ambatalia things : )

And the birkenstocks were a really light lavender/grey so they dyed really well! I highly recommend the class, Molly had a great time.